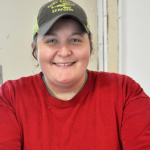 Freshwater Seafood, owned and operated by Butch Smith and his family, is the largest wild catfish processor in the state. Based in Loreauville, they fish themselves and purchase from other fishermen. Using hoop nets, local fishermen fish all the inland freshwater rivers and lakes of Louisiana including the Atchafalaya Basin, Red River, Toledo Bend, and more.

As America’s watershed, Louisiana’s river basins have no shortage of freshwater catfish—it is the number one finfish group landed in the state, including channel, blue, bullhead, and flathead catfish.
Though Freshwater Seafood unloads up to 10,000 pounds of wild catfish on busy days, it remains a sustainable seafood choice; there are actual concerns of catfish overpopulation in some areas of the state. They are a USDA-certified processing plant, and pack Vermilion Bay Sweet Catfish brand for our Shop.